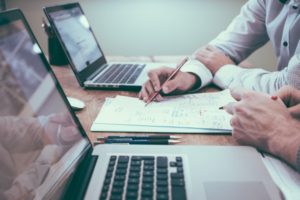 “No act of kindness, no matter how small, is ever wasted.” -Aesop

Kindness and treating people well is the secret sauce to business growth and development. I learned this from a mentor of mine, Dick Bowers. Dick Bowers was the city manager of Scottsdale for nearly 20 years and the renowned legacy he established is founded upon kindness.

There were two principal things Dick did that set him apart from other businessmen. First, he called each employee on their birthday and anniversary every year. During that call, he also thanked them for being a good steward and for providing their services to the city of Scottsdale. Dick’s interactions with his employees were personable and genuine which developed a strong, positive and productive company culture.

Secondly, once a week Dick opened the phone book and randomly chose a Scottsdale citizen to call. He would ask them, “How am I doing?”  By asking for feedback from the people he served made them feel valued, important and heard.

I started to implement the same legacy, but at first, I failed. In 1995, when I was running Southwest Ambulance, there were no cell phones and no text messages; there were only beepers. When I called, I called them at home on their landline. If they were not home, I left them a message.  A message along the lines of, “Hi John, this is Jim Hayden calling. Would you mind giving me a call back at my office? Talk to you soon.”  Leaving my employees messages to call me back caused great distress. My employees would wonder, “Why would my boss be calling me at home today?  OH MY GOD, what did I do?” This backfired.

For a while, I had to keep calling until someone answered. Eventually, my staff made arrangements for me to stop by the stations of those employees who were working on their birthday or anniversary.  When I stopped by the station, I would walk in and get everyone’s attention.  I would say, “Today is a very important day for the overall success of our company. Today is John’s anniversary; he’s been with our company for 3 years.  If it wasn’t for people like John, I wouldn’t have a job and John, thank you for the great job that you do working for our company.”

Happy employees, because they are treated with kindness, will go out of their way to be better employees. They will go one step further because now they genuinely care since they feel genuinely cared for. It is not about a job. It is about the people that work those jobs and the treatment and appreciation they receive for their work. By acting out of kindness, it truly allowed the experience with my employees to be the best that it can be.

The impact was valuable. In fact, last year a previous employee called me on her birthday and said, “Hi Jimmy, I just want you to know how much I missed you calling me on my birthday.” It has been 9 years since I called her on her birthday. By calling on birthdays and anniversaries, I left an impact that went beyond the walls of that organization.

The second tangible act of kindness was a bit harder to emulate back when I was running Southwest Ambulance.  When people call 911 and it is the worst day of their life, how was I supposed to have a conversation with them and ask, “How did we do?”

Instead, I made it a point that every time I was in an emergency room, I would find out which patients we had transported. After ensuring they were stable, I asked them how their experience was and how it could be improved. Giving somebody a blanket, an extra pillow, or even just listening to their situation can be the greatest act of kindness with the simplest gesture. I did not provide any medical advice not did treat them from a clinical perspective. By listening to them and their needs, concerns and thoughts, I ensured for those few moments, that they had not lost all control.

Active listening is an integral part of kindness. You have to be genuine, real, and sincere to actively listen. You cannot just be nice. Hearing someone will make all the difference. Being kind and an active listener with employees, customers, clients, and patients alike is the secret sauce to the success of a business.

The impact others left on you should be extended to impact those you influence. Cultivating culture starts from the top down; if you are in leadership within your organization then you have direct influence over the experience people have. If you are trying to create a culture of kindness in your company, reflect on the specific acts of kindness people extended to you; those same traits can be used, and should be used as business leaders.

People never forget kindness. You do not forget when somebody was kind to you…